Africa Hunt Lodge is pleased to finally offer Hunts and Green Hunts for the majestic Southern White Rhino. Our Rhino Concession is story of success. With over 250 Rhinos on a 20,000 Hectare concession in South Africa, our numbers are growing each year.  On a Rhino hunt in South Africa, you will see many Rhino and have multiple choices.

Our hunters typically hunt White Rhinoceros in conjunction of a 7-10 day African Safari. One of our Experienced and Licensed Professional Hunters will be your guide during your Rhino Hunt, and you will hunt spot and stalk getting within 40 yards from them at times. We can accommodate Rifle hunting for the White Rhinoceros.

Our Rhino Green Hunts will also be exciting and you will be able to measure and score this Rhino for the record books as well.  Accompanied by a veterinarian and staff, you will spot and stalk Rhino on foot, getting just meters away, before you tranquilize the massive Rhino with medication and a sedative. Once the animal is sedated, you will have photo opportunities, while the technicians check the vitals of the animal, take samples for the Rhino Registry, and then release the animal.

Where does the money go when hunting Rhino with Africa Hunt Lodge?
- Ninety 90% of the trophy fee to harvest a Rhino at our concession in South Africa goes to further propagate the species as well as protection from poachers
- The concessions where our Rhinos are maintained, protected and breeding requires hundreds of thousands of US Dollars each year in protection from Poachers
- In a drought condition, which Southern Africa experiences more often than not, we must supplement quality feed for the Rhino herds which runs nearly $1 Million US Dollars per year


How many Rhino do you shoot at Africa Hunt Lodge?
- Our Rhino concession breeds hundreds of Rhinos...in fact, there are over 75 births each year
- With over 75 births each year, we harvest less than 10 Rhino each year for hunting purposes.
- We do not shoot cows or young Rhinos...we only hunt post-mature males which have done their part in conservation by breeding for many years, and are determined to be no longer breeding or kicked out of the herd. 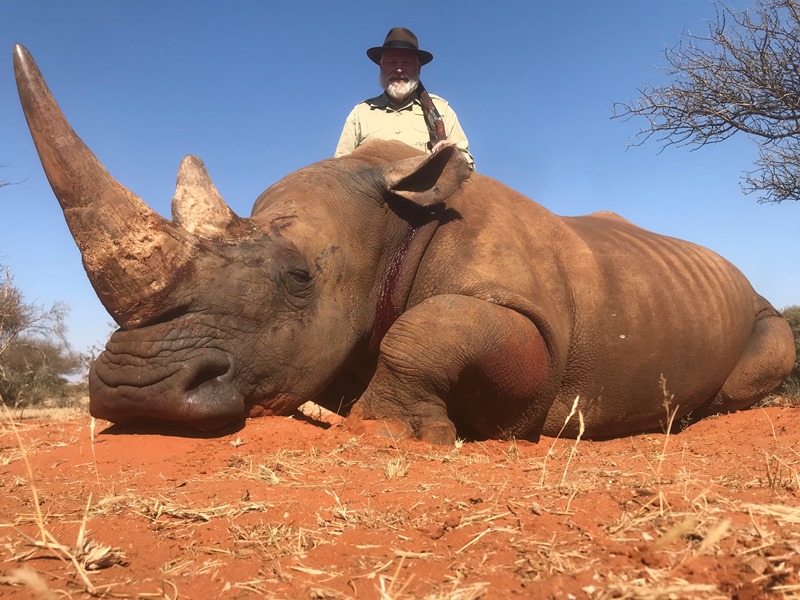